Public displays of praise and adulation. But mostly because I’m a big fan of feedback. It’s tough to look at something you’ve spent hours and hours writing and re-writing with a fresh eye. It’s so helpful to get an outside perspective and I got a great one from Wildsound. 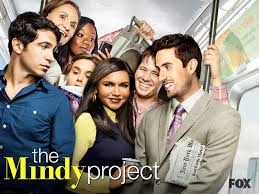 Mindy and Danny clash over how culturally aware to raise their child. Meanwhile Morgan tries to help Jeremy avoid deportation.

Get to know writer Katie Bero:

1. What is your TV screenplay on the show “The Mindy Project” about?

Mindy and Danny clash when Mindy refuses to indulge in his new obsession with Indian culture. Meanwhile, Jeremy’s visa expires and Morgan is on a mission to help him avoid deportation. As you can see from this explanation, it’s a real barrel of laughs.

2. How does this episode script fit into the context of the show?

It takes place at the very beginning of Season 4. It starts to introduce Danny and Mindy to both the logical and illogical insecurities that await them as new parents.

3. How would you describe this script in two words?

4. What TV show do you keep watching over and over again?

Broad City. There are so many visual jokes you pick up the second time around. Also I’m convinced if I watch it enough Abbi and Ilana will crawl out of the TV and eat Tostitos and cheese dip with me. I said that like we’re on a first name basis, but just to be clear, we are not.

5. How long have you been working on this screenplay?

It took me about a month to write from outline to billionth draft.

6. How many stories have you written?

Does my diary count? I’ve also written two original pilots. One on my own and one with a writing partner. Hi, Charlotte! Ok

that’s enough about her, this is about me.

7. What motivated you to write this screenplay?

I’ve always loved how strong, but distinct the character voices are on The Mindy Project. As a writer it gives you an arsenal of things to play with beyond just the main characters. Beverly’s one-liners. Tamra’s oddly insightful commentary. Also, Morgan is my spirit animal. I can really relate to wanting to live in an apartment with 40 dogs, but we’ll get into that later.

8. What obstacles did you face to finish this screenplay?

None. Just kidding. Honestly the toughest obstacle is everyday life. I have a really demanding job as a writer in advertising so I had to force myself not to make excuses and make time instead. Like, by not doing aforementioned real job. I’m kidding, it was mostly a lot of late nights and early mornings. That also happens to be when I do my best writing. If my boss is reading this, please know I’m always fully engaged and dedicated to my job. If a showrunner is reading this, please hire me. Mostly because I probably just got fired.

Production. I love being on set and watching the words you put on paper come to life. I’m also very passionate about golden retrievers. I wish this were a joke, but those who know me know that this is a very serious obsession.

10. What influenced you to enter the festival? What were your feelings on the initial feedback you received?

Public displays of praise and adulation. But mostly because I’m a big fan of feedback. It’s tough to look at something you’ve spent hours and hours writing and re-writing with a fresh eye. It’s so helpful to get an outside perspective and I got a great one from Wildsound.

Stay true to your voice. Or stay true to the hit show The Voice and only rely on the feedback of Adam, Blake and Gwen / Christina. Whatever works for you. It’s all subjective, but at the end of the day if you don’t love your script then what’s the point? Write what you love and love what you write. How many of you want to punch me for saying that? Great, me too.

Also, please adopt a golden retriever and send me photos. That’s not really advice so much as a desperate plea.